Welcome to Speak Your Art Blog Hub. This blog combines posts from seven of my other blogs: In the Flow Studios Arts, In the Flow Studios Body, I Love Shelter Dogs, Mana Keepers, PaaMano Eskrima & Performing Arts, Self-Actualization thru Women's Empowerment and Speak Your Art Poetry. It brings my organizations together and offers my readers an easier way to follow new posts in one convenient location.
I hope you will find something that inspires you, empowers you or reminds you of the limitless possibilities that dwell within you. Thank you for visiting. I wish you Peace today and everyday. 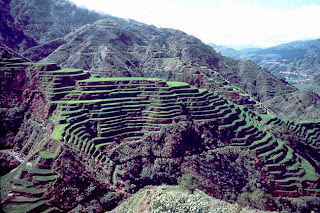 The Banaue Rice Terraces are a National Cultural Treasure under Ifugao Rice Terraces. (Tagalog: Hagdan-hagdang Palayan ng Banawe) also called Payew, are 2000-year old terraces that were carved into the mountains of Ifugao in the Philippines by ancestors of the indigenous people. The Rice Terraces are commonly referred to by Filipinos as the "Eighth Wonder of the World".

The terraces are located approximately 1500 meters (5000 ft) above sea level and cover 10,360 square kilometers (about 4000 square miles) of mountainside. They are fed by an ancient irrigation system from the rainforests above the terraces. If the steps are put end to end it would encircle half the globe.

The terraces are mostly found in the province of Ifugao and the Ifugao people have been its caretakers. The Ifugao still plant rice and vegetables on the terrace.

As their source of life and art, the rice terraces have sustained and shaped the lives of the community members

About Dewdrops of Inspiration the Book

Dewdrops of I'nspiration was originally a 45th birthday gift to myself. It was a significant birthday for me. My two sons were grown an...