Welcome to Speak Your Art Blog Hub. This blog combines posts from seven of my other blogs: In the Flow Studios Arts, In the Flow Studios Body, I Love Shelter Dogs, Mana Keepers, PaaMano Eskrima & Performing Arts, Self-Actualization thru Women's Empowerment and Speak Your Art Poetry. It brings my organizations together and offers my readers an easier way to follow new posts in one convenient location.
I hope you will find something that inspires you, empowers you or reminds you of the limitless possibilities that dwell within you. Thank you for visiting. I wish you Peace today and everyday.

PaaMano Eskrima Performing Arts Core Company had a blast at the 19th Annual Pistahan in San Francisco this August. A great job was done by all. We are very proud of our Core Group. They put their heart and soul into their performances and it showed. Grateful to the Pistahan for giving us an opportunity to share our art and heart.

Here are some of the highlights:

PaaMano Eskrima Performing Arts dedicated this piece to the youth. It is called Building Bridges and honors Filipinos living all over the world. Here we celebrate that Filipinos have brought their flavor and heritage to many countries, cultures and art forms. This piece is an experimental fusion/collaboration combining different elements of dance, music and choreography into one unified artistic expression. Debut performance at the 19th Annual Pistahan Parade and Festival on August 8 & 9, 2012.

This is PaaMano Eskrima Performing Arts' Tribute to the King Bird, "Haring Ibon". The Philippines Eagle is the national bird of the Philippines but sadly this majestic raptor is critically endangered. The Haring Ibon is our mascot because part of our organization's mission is to help share the plight of this important eagle. We believe that one person can make a difference. Organization working to save the Eagle: http://www.philippineeagle.org/

Doble Barong is one of the Sayaws (dance/martial/forms) in our PaaMano Eskrima System. Our Sayaws were created not only to enhance martial and rhythmic technique but also to honor the artists and the warrior ancestors of the Philippines without whom this art would have died. As Filipino Martial Artists we truely stand on the shoulders of our ancestors. We are honored to keep the art alive for future generations. And we are grateful to all the FMA practicioners all over the world for doing the same.

Paamano's Tribute to Princess Urduja.Princess Urduja is a warrior princess who is said to have ruled the kingdom of Tawalisi in the province of Pangasinan in the Philippines. This 13th century Warrior Princess was said to have announced that she would marry no man that could not defeat her in battle. Our piece portrays the legendary Chinese Pirate, Limhang that steals her heart in battle.

Paamano Eskrima Performing Arts Tribute to Gabriella Silang. Known by many as the Joan of Arch of the Philippines. María Josefa Gabriela Cariño Silang (March 19, 1731 -- September 20, 1763) was the wife of the Ilocano insurgent leader, Diego Silang. Following Diego's assassination in 1763, she led the group for four months before she was captured and executed. She is still a roll model and inspiration for young women.

Description: PaaMano Eskrima literally means paa-foot, mano-hand, Eskrima-skirmish. Master Roland Ferrer created and founded this style in 1992. The style combines multiple styles of weaponry with empty hand concepts as well as kicking applications. Elbows, knees, takedowns and disarms are an integral part of the system.  Eskrima is a flowing and rhythmic art. Its’ practice was outlawed by the Spanish conquistadores. The Filipino people had to find a way to keep their art alive to pass down to the next generation. They solved this problem by incorporating the martial art into some of their traditional dances. The martial art was hidden in dance for centuries.

PaaMano Eskrima was created to honor all the evolutions and changes of the art throughout the ages. The Sayaws (dance/forms) created for this curriculum are a balance of accuracy and application with flow and artistry. They are a tribute to the fine warriors and performers that for so many centuries kept the art alive for us to enjoy today.

We are grateful for all the different Arnis, Eskrima and Kali, styles, instructors and practitioners for keeping the art alive for future generations and for sharing FMA with the world. Salamat po.

Posted by ManaKeeper at 1:42 AM No comments:

We are proud and honored to have been accepted to perform at the Pistahan Parade and Festival in San Francisco, CA. August 11 & 12th at Yerba Buena Gardens.

PaaMano Eskrima Performing Arts will be bringing our core group to perform. Our show will feature our PaaMano Eskrima Style as well as tributes to Princess Urduja, The Haring Ibon, Sultan Dipatuan Kudarat, Gabriela Silang and the ancestors that kept Eskrima alive for us today. To learn more about these Heroes you may goto our website at http://www.paamanoeskrima.com/ 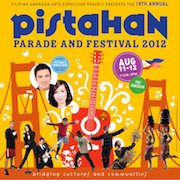 Look for us on Sat., August 11th marching in the parade and Sun. August 12th performing on the main stage at 1:30pm and teaching an interactive Eskrima workshop at the Play Pavilion at 2:30pm. If you're in the area come out and share in the fun!

Here is the official Pistahan Commercial.


Posted by ManaKeeper at 3:23 PM No comments:

About Dewdrops of Inspiration the Book

Dewdrops of I'nspiration was originally a 45th birthday gift to myself. It was a significant birthday for me. My two sons were grown an...